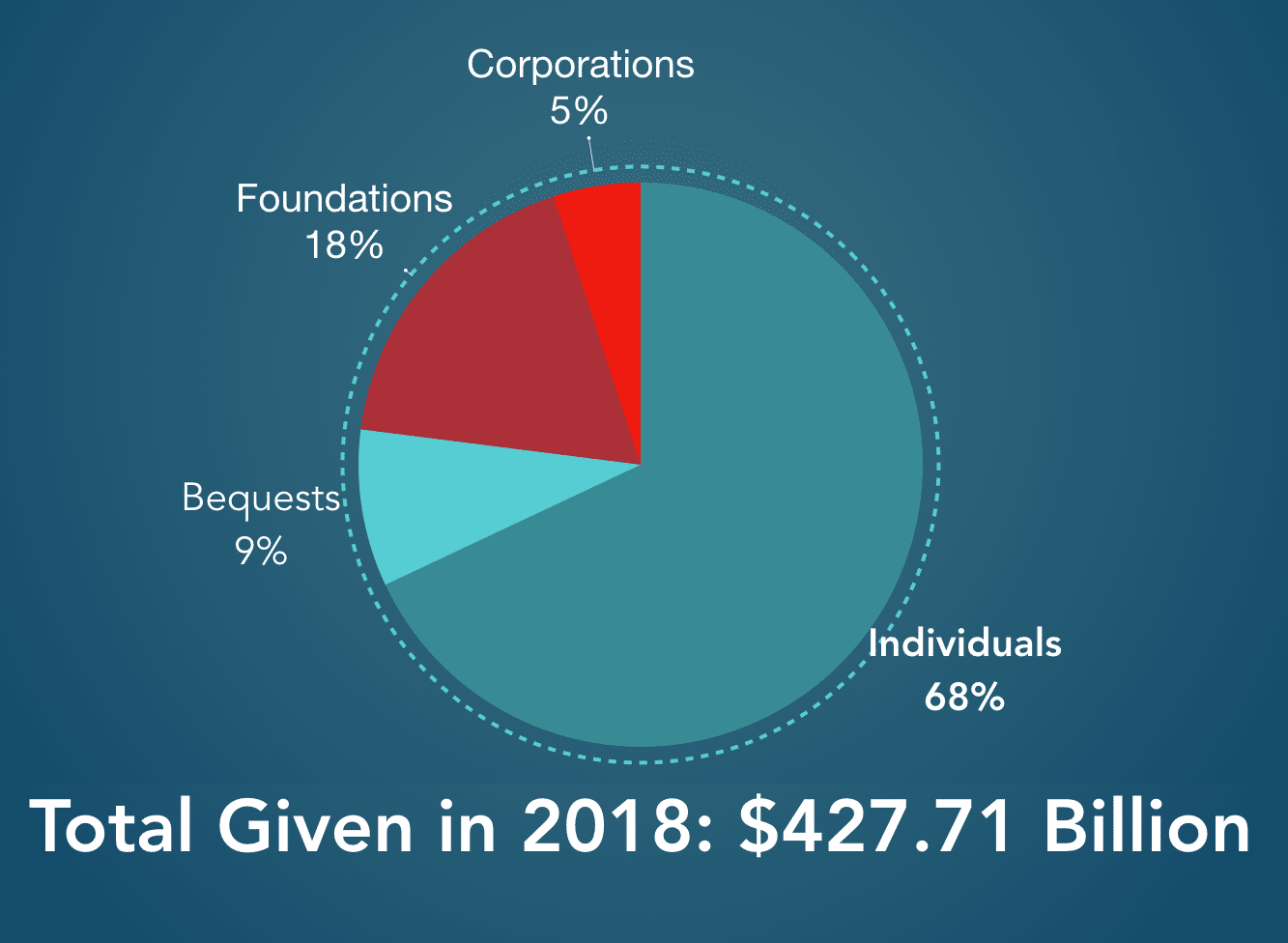 Adjusted for inflation, yes, giving is down. That is in part because there was a flurry of giving in December 2017 as people tried to figure out what the new tax law would mean for them. We saw “bundling” start – advisors recommending donors give 2 years worth of gifts instead of annual gifts. (It’ll be interesting to see if advisors remind donors to double up again this year.)

2018 was also impacted by a fourth quarter roller coaster in the stock market caused by the current administration. Tweets and tariffs are horrible for the certainty the markets crave. While donors were doing better, this fear seems to have triggered “psychic poverty” causing them to want to conserve a bit more than normal.

As Micheal Rosen points out, total dollars given was actually up. So by total dollars, that measure is up. Only 0.7% but still higher – that’s $2.97 billion more. (I can’t wait until we stop getting super excited for 1% or 2% growth. Giving in the United States seems really stuck to about 2% of GDP. It’d be amazing what we could do if it were doubled – and additional 2% would make giving much closer to a trillion dollars. How much could would be possible in our country be if that happened?!)

So people are still giving generously. They may simply not be itemizing. Since “itemized giving” is a common way Giving USA has tracked overall giving, this is something to watch.

But all is not rosey. For years and years, researchers have noticed a decrease in actual donors. This could be due to a move away from mass donations with a push for fewer major donors. But it’s likely also related to a lack of religious affiliation and a major increase in other ways people can be generous. Crowdfunding campaigns democratize giving, but often got to individuals or even companies, not nonprofits.

And, as one commentator wisely noted, it used to be that the easiest way to identify as a person who cares for the environment was to give to The Nature Conservancy or the Sierra Club. Now there are many more ways people can identify as caring for creation. They can drive a hybrid or electric car. They can use solar panels. Or compost. Or do any number recycling projects. These could be private acts or working with nonprofits, for-profits, or government organizations.

What we need to do

I firmly believe we could focus on the negative and the headlines and get depressed. But that won’t fund our organizations. So we should be aware of the troubling trends. And be even more grateful for the generous people close to our nonprofits.

And get exponentially better at telling those donors how grateful we are. And what a terrific impact their giving is making.

Donor surveys consistently show that close to 50% of the reason donors stop giving to a nonprofit is some version of them not knowing their giving made a difference.

I also think we need to get exponentially better at asking. So much of what passes as “fundraising” is really only hinting, and nudging, and “educating.” Helping people know about us is great. But no money is raised until someone is asked. So we need to ask. Passively, like email and direct mail. And actively, like phone calls and one-on-one visits.

This involves the revenue for your nonprofit. As a leader in a nonprofit, you must stay educated on this.

There’s a lot of news out there. And the headlines screaming doom and gloom tend to go much further. But some of the best analyses I’ve read so far are:

Micheal Rosen is a fundraiser and a journalist. His views help give a different take on the headlines. These two in particular:

​And Jay Love is a veteran in the field who’s been behind some of the best research ever. His analysis is a must read for all nonprofit leaders and fundraisers.

And the Giving USA report can be purchased at: https://givingusa.org/. The summary is good, but it’s worth your investment to buy the full report.