You are made of the right stuff 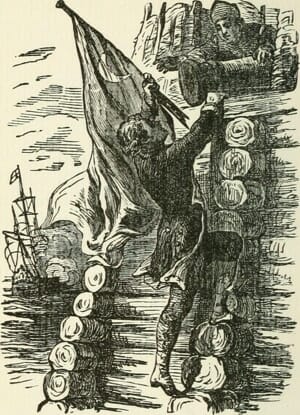 I love listening to public radio. Today, I caught the tail end of a history program called “Walter Edgar’s Journal.” The guest, Jack Warren, was talking about the amazing defeat of the British Navy at Sullivan’s Island in the summer of 1776, just six days after the signing of the Declaration of Independence.

The British Navy was the best on the planet and they’d sent the best of the fleet to the attack. On the other hand, the fort on Sullivan’s Island was poorly constructed from local timber and wasn’t even finished being built. The general George Washington sent to inspect the defenses’s asked what “damned fool” had planned it and said the fort was nothing more than a “slaughter pen.” So the outcome of this battle seemed clear: another victory notch in the belt of the British Navy.

Isn’t that how leadership often feels? We see the forces against us as indomitable. And we often question the stuff we’re made of, afraid we really might not have what it takes. Many times if feels like we’re not quite finished enough to face the opposition. It seems the outcome of our battles is clearly against us.

It turns out the stuff the fort was made of was exactly what was needed to defeat the enemy. The spongy palmetto wood walls backed by soft sand absorbed the impact of the British Navy’s cannon balls. Harder wood would’ve shattered on impact. But the palmetto wood seemed to bounce the balls onto the beach. Couple that with a deep channel that didn’t allow for British infantry to attack and “careful fire by the defenders” causing “significant damage on the British fleet,” and the battle became one of the British Navy’s most humiliating defeats.

Listening to the story, I found myself wanting to tell you: You’ve got this. Whatever you’re facing, you are made of the right stuff. Even though it seems like you’re just haphazardly put together, the experiences you have had have uniquely equipped you for this moment.

The next time you feel overwhelmed by the pressures on you, think of the Battle of Sullivan’s Island. Chances are, you’ve got this. In a big way.

The quotes in this post come from articles on the battle on Wikipedia, a war history site, and the conversation with Jack Warren on Walter Edgar’s Journal.