003 Honor the process – Bill Littlejohn of the Sharp Healthcare Foundation 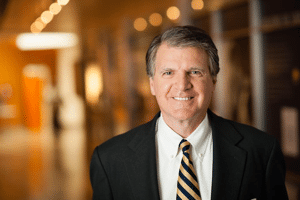 Bill Littlejohn is the CEO and Senior Vice President of the Sharp Healthcare Foundation and the former Board Chair of AHP, the Association for Healthcare Philanthropy.

In this episode of Concord Leaders, Bill shares about leading by example by being a coach/counsel/mentor kind of leader. And he talks through helping leaders honor the process despite the emotional valleys.

You can learn more about the Sharp Healthcare Foundation at https://give.sharp.com/sharp-foundation/about

Bill: Thanks, Marc. I look forward to our discussion.

Marc: I’ve known Bill since being involved in Healthcare Philanthropy myself for the better part of a decade. Our writings and our work kept circling around each other, so he’s been a rock star in my universe for a long time. I’d love to know you’ve been a leader in so many different aspects, in your own hospital, in the field of philanthropy and other areas of your life. What do you enjoy most about leading?

Bill: That’s a great question, great way to start. I really think about because philanthropy and development is so much built on relationship development, that is relationship with leaders and developing leaders and then developing yourself as a leader, I think that’s inherent in the professional development dynamic. It becomes more about that relationship dynamic, and I’ve said this on numerous occasions in professional development and fundraising development that I really don’t think about it so much as supervision or supervising a team or running a shop. I think about the aspect a leader is really a coach, counsel and mentor to people in helping them along their professional pathway either as a professional, or as a volunteer or as a donor. I think I hone that in my work as a consultant, so I was one of the work wear people who went from being a consultant to the in-house job.

In those years of being able to counsel, and coach and mentor folks whether it would be a board of directors or be a CEO or a development team, I really realized that leading was about that leading by example more so than anything else versus being the oversight and being the director and telling people what to do, it was working with them and showing them what to do. I think that really comes out very significantly. I think in our roles in professional development leadership is about leading by example, being that coach, counselor, mentor, partner, in power driver more so than I’d say I’m directing and I’m in charge. I think that really has helped define me in terms of my leadership skills and roles.

Marc: You said that you got in really stark reality, or you realized this is being a consultant. Is that right?

Bill: I had the fortunate aspect of part of my career after spending a number of years at the American Cancer Society where I really learned my fundraising skills in trade. I became a consultant and did lots of feasibility studies, interviewed people, did audits and campaign management. I really think that the 2 things that came out of that for me were doing so many interviews, and honing my interpersonal skills and leadership skills, and leading people through discussions, and then being a campaign leader, and helping train and lead institutions and teams towards success in a campaign. I said as I used to tell people what to do kind of thing and that aspect of being a leader. Then I had to tell myself what to do when I took the job at Sharp [crosstalk 00:03:28] one of my clients as a consultant. They offered me the job, I took it. Now I had to look in the mirror and say, “Bill, you have to lead yourself, not just lead the team.”

Marc: It’s interesting because that’s what my experience leading the foundation at the hospital I was at was my work at that time as fundraising coach, doing the blogging and telling people the basics of fundraising helped me remind myself what I needed to be doing, how I needed to be empowering donors, different things that I was forgetting. The cobbler’s kids don’t have shoes, so it’s interesting that that was your experience too.

Bill: I think it’s great you did have that title, fundraising coach. We sometimes get caught up in the titles of what’s on our business card and that I’m the CEO, or I’m the executive, I’m the president or the director of development, it is. Our roles in leadership are much more really on the ground leadership and demonstrating leadership through coaching and counseling versus saying go to this and come back and tell me when you’re done.

Marc: That’s really important too. I remember when I had my first promotion from the alumni director to a major gift officer. I never wanted that title on my business card because I could find any donor who would find something else to do rather than talk to the major gift guy.

Bill: I joke with people saying that I might be the CEO of the Sharp HealthCare Foundation, but I think of myself as the “Chief Investment Officer” for Sharp HealthCare because my role is to help people in the future of healthcare in San Diego through philanthropy versus just being an executive.

Marc: Nice. My title was “Director of Individual Gifts.” I figured that worked well for all different aspects of my life too. You had a lot of experience as a volunteer and paid leader. What was a time that you ran into some conflict or hardship and how did you handle it?

Bill: Really it’s both as a professional when I’d been at Sharp and when I was a consultant. I did a lot of campaign work, a lot of initiatives and projects. People are probably kidding you if you think that every campaign is just this wonderful aspect that just goes along perfectly, that the money grows, and grows, and grows and reach our goals. Invariably, campaigns and initiatives have the peaks and valleys. I think that really where the aspect of our skills and our experience and true leadership is is helping organizations and the people who run them through those valleys. They can be rather deep. There would be slow periods where people begin to question your leadership around a campaign or an initiative, that some volunteers or board members might think we can just wrap this campaign up in a few months. It seems pretty easy to do, let’s just have a big party and talk to people, and we’ll all give money.

What it really came down to was we had to be, and I especially had to be a leader in the aspect of having groups, boards, hospitals, organizations honor the process of successful major gift philanthropy. No matter how many slings and arrows, they might think we can do it this way, or let’s just write everybody a letter, it’s the aspect no there is a time tested process. You have to not just trust, but you have to come along with me. Me knowing that takes time, and there’s elements to it. If we honor the process of successful major gift philanthropy that has been proven out that you may not have as much experience with, we will win this together. I think it really does test us. Often times you’re the expert, or you’re the professional, yet it appears that what you’ve laid out isn’t going to plan.

I invariably have to say is that I’ve often counseled organizations. A campaign plan is like a battle plan and a war. After the first shot goes off, everything goes haywire. It became the leadership skill was to say, “No, the plan is there for a purpose. I’m here not to supervise it, but to guide you along the path. We are going to go through peaks and valleys.” That really has tested me over the years, and it’s been a challenge. Then you get to the other side. I’ll just share a story. We did a campaign for a small community hospital up in the gold country of California years ago. The hospital had been an Old County hospital. They never raised much money in that county.

We told them they could raise $1 million, and they thought we were crazy. They’d never raised more than a couple hundred thousand dollars in that small community. We took them through the campaign month by month, step by step, peaks and valleys, difficult days and great days. That was again the aspect of going back to be a leader was taking them through as coach, and counselor and mentor. I remember at the end that we had a wrap up meeting everyone is excited about. They went $1.4 million on a $1 million goal. They looked at me and said, “Wow, thanks. We never thought we could do that.” I remember saying, “I knew you could do that. It was just we had to do this together.” They grew so much as leaders, and as volunteers and participants in a great endeavor. If I look back and say, “It was you doing it, I just helped you along the way.” I’m proud of getting them through all of those peaks and valleys, and ups and downs and stumbles along the way.

Marc: That’s really true. I continue to be surprised. I’ve been close to 20 capital campaigns, and it still surprises me how low the valleys can be.

Bill: That’s a great point. That’s why being such a great coach and what you do is so valuable because there’s no campaign is perfect in that. You say that if you could autopsy campaigns, the reasons they fail are the same reasons they succeed in inverse, that you were able to engage enough people, and you do it in the most effective way. That’s again the mark of leadership is dedicating yourself to knowing that is the objective. Money comes as a result.

Marc: As we come to the end of this discussion, the time has flown, would there be a strategy or a tip or one thing you’d recommend that the CEOs and the executive directors listening to this do right after they finish listening to us?

Bill: I have a picture on my desk from some colleagues, and it does say honor the process. The process of successful major gift work or campaign was you had to educate. You had to ask effective, and you had to follow up. No matter what you’re doing whether it’s big or small, if you successfully communicate and educate your case, your cause, your message, your story and have confidence going into the aspect of asking people then to invest in what you’ve shared from your storytelling and educational aspect, and you do it in an effective way, and you then follow up and remain dedicated to that relationship and decision that people will make on your behalf, ultimately that’s the mark of a successful organization in individuals is that they honor that process.

Marc: Bill, thank you so much for being a guest here on Concord Leaders. I know that I’m inspired by this, to remember the relationships that you talked about in the beginning with others as well as developing yourself as a leader. I think honor the process is a great reminder because we get impatient sometimes and get ahead of ourselves as CEOs. We could see the vision, we just wish …

Bill: Chase the money down, right.

Marc: Exactly. Really appreciate you being here. I know people are going to want to listen to this one over and over. For those of you listening, this episode with all the episodes of the Concord Leadership Podcast will be found at https://concordleadershipgroup.com/podcast/. Thanks so much.