Not being a status quo leader with Sr. Georgette Lehmuth 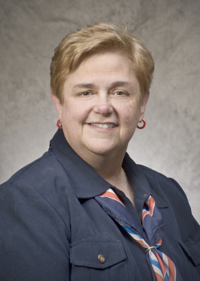 Sr. Georgette Lehmuth is the President & CEO of the National Catholic Development Conference.

In this episode of Concord Leaders, Sr. Georgette talks about how she reconnects with the NCDC mission. And she gives loads of practical strategies to make sure your board stays focused on governance rather than getting into the weeds of day-to-day decisions!

You can learn more about the National Catholic Development Conference at NCDC.org

Sr. Georgette: Thank you. I’m glad to be here.

Marc: I know we go back years now working together. We have so many really wonderful people that come together and help fund mission in ways that I know our communities are stronger because of. Tell us a little bit about how did you get into leadership, or what do you enjoy about being a leader?

Sr. Georgette: Oh well, I enjoy being a leader for many reasons especially being a leader of this particular organization. I actually came from a leadership position previous to this job. I was working on leadership for my own religious institute, the Franciscan Sisters of Our Lady of Perpetual Help, so I had been part of designing and directing and moving our mission forward for ten years. Then this position became open, and I had development experience. I had been part of the National Catholic Development Conference for a good many years and had benefited from their classes, their experience, their networking, keeping us on target and keeping us informed about issues important to the Catholic philanthropic community, so I was excited when the position was open. I was asked, first of all, to serve as an administrator to fill in some space for about six months. At that end of that six months I was given the opportunity, if I wished, to apply for the job, which I did. I was among other candidates, but I was the one that the board finally selected.

I think what I like most about leadership is, of course, the people. It’s always about the people. My favorite thing is our annual conference where I get to see all of our members and get to talk with them, do some one-on-one. I’m constantly on the floor, running into people, trying to talk to them wherever I can catch them just to let them know we deeply care about their missions, and what they are doing, and if there’s anything we can do to further those missions for them, we’re there for them. So I love being among the members.

I love visiting the members. I visit our regions on a regular basis. We have about eight different regions that we hold meetings and conferences and opportunities for them to network with each other. I love seeing them in action: being on a reservation where one of our members has a school, being in a hospital where our members are serving those most in need, being in a diocese and seeing all the good work that is being done there or a charitable organization such as the Catholic Charities. I had the privilege to go to Peru and see what Catholic Relief was doing in Peru, so I’ve had some really good opportunities to be among members. It makes what we do real. It makes my work real. It makes me constantly be aware that I am also a part of these missions, which is the mission of the Gospel from our Catholic perspective. I love leadership.

I remember when I was interviewed for the position, I told the board that our communities, our religious institute’s mission is to be a transforming presence in the world by spreading the Gospel of hope and joy. I said, “If you hire me, I will not be a status quo leader. It will definitely be things will have to happen. I will constantly push for transformation, for innovative, for growth and expansion of mission.” I think that’s how I see my role as leader of this institution.

Marc: That’s what I love about our interactions together every time I go to NCDC’s annual conference, it’s clear that, even though people are there for different tactics of advancing mission, particularly often fundraising or marketing, direct mail, different tactical strategies stuff, you are always raising everybody’s vision to it’s about the bigger goal. It’s about the Gospel. I think that that is a great reminder for all the attendees that what they’re doing is part of a much bigger picture, even validate some of the struggling they’re going through at the time. It also helps give them context for their successes as well. I love that about the way you lead NCDC.

Sr. Georgette: Thank you. I appreciate that.

Marc: Oh, you’re great at keeping focus on the right picture. You said something that made me think that there must be at least a story about the time that you had a difficulty and the way you worked through it because you said you’re not going to be status quo. I know that in my experience working with leaders, boards often like that until they hire that person, and then they’re surprised that the person actually meant it. Did you run into that at all, or was there some other time that you ran into some challenging situations?

Sr. Georgette: I think I was kind of lucky because during what you would call, I guess, the honeymoon, the board kind of stayed the same. It didn’t change too much in membership, and the board chair stayed the same for three years, which was very helpful to me. He clearly felt this was an important time for NCDC to make some choices about how they wanted to be, who they wanted to be, and how to move forward and how to move our mission as a national Catholic organization forward, so I was blessed that I had a real partner in leading the organization in the chairman of the board.

The first thing we did is we looked at what it means to be a board, and we did a lot of board development. We talked a lot about the role of governance and in what directions we wanted to go. Then we set up a whole system of committees that would engage not just the board but would engage our members, because I kept emphasizing that ownership of an organization comes through engagement. We went from engaging maybe thirty or forty people who were doing some things at some level with NCDC [inaudible 00:06:13] fairly regular basis … we ended up with about two hundred people being invested and engaged in different committees. We have one-day meetings and focus groups and things like that within a year. That changed the texture and the whole atmosphere in the organization. I think it made the board feel that they really were making a difference without having to get into the weeds of the day-to-day operations, which had been the previous experience of the board.

Marc: Sure. I think that many nonprofits struggle …

Sr. Georgette: So that was transformational for us.

Marc: If you could do a little bit more on that because I think a lot of nonprofits struggle with board members that aren’t really sure of their governance roles so they do go into the weeds where they’re not supposed to be.

Sr. Georgette: Yes. Again, I was very lucky. Most of our folks who sit on our board are development directors because our board is formed from the membership. However, during that same first three years that I was in office, we had three or four people who were executive directors. They were not actually the development director, but they were the head of the institutions that were the members. As a result of that, those folks also helped keep us in line. When we would start getting into the weeds or when a board member would say, “We want to decide why is that brochure this color and not that color?” one of them almost automatically would say, “That is not our role.” That was extremely helpful to have some people who had executive positions who could understand my position clearly, and when those lines were crossed, they were almost like a sergeant-at-arms in terms of keeping us in governance. They made a goal for three years that we will govern above all. That was their goal.

Sr. Georgette: It was on every one of the agendas that they sent out. It was on everything. Every minutes, anything that went out to the board, I always had that little tagline, “Govern above all.”

Sr. Georgette: In every single meeting we talked a little bit about governance. I would bring some article either published by ASAE or some other group about good governance. BoardSource was another group I used. They would take an extra day each of those first three years just to reinforce again what it means to be a board and how it acts as a board and to look at the goals and directives and refresh them and adjust them and to talk about how they’d been monitored and how we’re moving forward.

Marc: Wow. Wow, there’s so much packed into this our listeners will be able to put into practice. Is there one strategy or one tip or one nugget that you think people should think about putting into practice today?

Sr. Georgette: … they were getting both perspectives at the same thing. That was one thing that I think helped. Then I think the chair and I went to a couple conferences together, like the ASAE presents, and I think that was also helpful because then he clearly understood what his role was, and we really became a team. I think building a good relationship with your chair and/or your executive officers is essential and then that in turn, like throwing a pebble into a pond, it begins the ripple effect and all of the members on the board, then, becoming engaged and involved because you have a mini model, a micro model of how that can happen.

Marc: Wow. Well, Sister, thank you so much for being our guest on this podcast today. There’s so much even from that you were talking about getting out to the members and how that reenergizes you and reengages you on, that you are part of these missions but also that so much of the board governance that could really make somebody’s life so much easier, so thank you for that. I know people are going to want to listen to this over and over again. What’s the website that people can find out more about NCDC and about the conference?

Marc: Great. Well, thanks for being here. This episode can found at https://concordleadershipgroup.com/podcast/, and all the other editions of the Concord Leaders podcast can be found there as well. Until next time, remember healthy nonprofits start with healthy leaders.